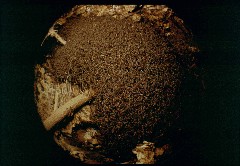 A sharp sting to my earlobe was the first indication that something had gone horribly wrong with my plan. Evidently I had underestimated the size of mesh covering my face while simultaneously overestimating the quality of the bee suite.

The ants were supposed to be on the outside whilst I was supposed to be safe and sound on the inside. However, this was not how things were working out.

Army ants are ferocious predators capable of bringing down creatures more than a hundred times their own size. Deadly scorpions, giant cockroaches, and even big, hairy tarantulas are regular features on the menu.

Because of their sheer efficiency at killing, nature has turned them into Bedouins: six-legged nomads that never settle in one place for long. If they stayed, everything would soon be consumed and the ants themselves would eventually starve. And so, they have dispersed with the concept of a permanent nest, building a temporary encampment each and every night. These provisional bases, appropriately named bivouacs, are formed from the ants own living bodies. They climb upon one another, hooking their claws together until chains are formed which eventually congeal to form a giant, seething ball. Consisting of up to a million livid individuals, it truly is a ferocious and extraordinary sight.

A BBC film crew from England were soon to arrive in Costa Rica to capture footage of Eciton burchelli for an upcoming documentary appropriately named “Killer Ants.” I had been hired to track down the insects in advance. 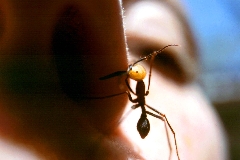 ” We will actually be filming deep inside the bivouac,” came the cameraman’s fax. With this in mind, I set out to have a get a good look for myself. I already knew that somewhere within resided her royal highness, the queen, surrounded by a multitude of ferocious guardians, but I wanted to know exactly where within the structure she would be, thus I concocted a cunning plan.

I had invested considerable time sealing the cuffs of the bee suite with Velcro, putting plastic bags over my hands and then placing heavy-duty gardening gloves on. My trusty assistant then circled me, securing zips and fastenings whilst making sure I was 100% sealed up. I felt like Houdini. I looked like the bad guys in ET.

The giant bivouac, fully three feet wide, awaited, its outer surface bristling with activity. A column of ants, meandering back from the forest, hauled in body parts from a multitude of victims. There were cricket legs and centipedes, all of which vanished silently into the colony as if the whole thing where nothing more than a ravenous, disembodied stomach.

I approached the thing, nervous with apprehension and sweating profusely within the confines of my suite. The smell emanating from the nest was sharp and acidic, and as I bent down to get closer, I could hear it hissing. Oh dear! 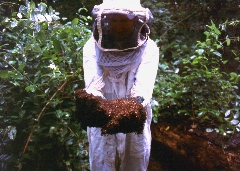 Gritting my teeth with stubborn resolve, I extended a gloved hand into the very centre of the bivouac, which opened up to receive me like an unearthly magic portal. Out poured pints and pints of white cocoons, spilling onto the ground like rice soup. The ants, justifiably cheesed off, swarmed up my arms like black molasses. Within seconds I was covered head to foot; that’s when the pain began.

The suite must have been made from economy materials, given that the big soldier ants were now stinging me through the fabric. Their outsized mandibles, resembling walrus tusks, masticated away enthusiastically, whilst the smaller casts slipped easily in through the facemask.

I tried to remain calm, but I couldn’t. Instead, I ran away in the manner of a headless chicken, screaming in pain whilst flailing spasmodically. It was paramount I get out of this useless suite, a task easier said than done.

Clumsily, I tore off the gloves and peeled myself out, but too late did I remember the extra precautions I had made with the cuffs. My poor hands were now truly trapped inside the sleeves, along with a fist full of huge soldiers. Oh what fun they had, stinging and chomping angrily away on my wrists.

I tripped over the inverted suite and fell to the ground where many more ants were rushing about looking for something on which to vent their indignant rage. My twisted, writhing body gave them all the opportunity they could have hoped for.

After much wailing on my part, my assistant put down her camera and came to my rescue, and ten minutes later (an eternity) I was liberated. A few angry ants continued to dispense revenge amongst the hairs of my armpits, whilst a gigantic soldier hung from my nostril, legs flailing, and jaws hooked tightly like an ornate nose ring, but by and large, I was free.

It took over an hour before I began to regain some semblance of sensation in my poor abused body. My neck had inflamed, my ears had turned purple and my arms looked like the surface of the moon. The army ants, however, had regrouped, and looked none the worse for their encounter; their bivouac melted back into shape almost as easily as it had disintegrated.

I never did see the queen, but I imagine that she saw me, and gave out an order to the troops: “Off with his head.” Fortunately, they failed in this endeavour, but I certainly learned my lesson. I now know that these are not quite that “Killer Ants” of legend, but they certainly are not to be trifled with.

I looked back at the bivouac and in my mind’s eye I saw the queen deep inside, surrounded by her loyal guards and imagined her voice sending out a warning to me:
” Just try that again, buddy.”

And so, I went home, stiff and sore, threw the suite into the bin, awaited the arrival of the film crew, and contemplated the folly of working with Latin America’s excitable little ants.