South Africa is a dramatic blend of cultures and stunning landscapes, forming a veritable smorgasbord of flavors for all five senses. It has two oceans, the finest of wines, a fascinating history and an optimistic future. And to top it all off, South Africa also has more ostriches than any other country on earth. Now there’s something to be proud of!

Oudtshoorn, known as “The Ostrich capital of the World,” is a small Western Cape town where oversized avians with undersized brains outnumber the locals 7 to 1.

Here the birds are fed and farmed, then made into hamburgers, handbags and feather dusters. However, a few lucky ones, those with class-A genes, will be spared the guillotine and will instead live a long life of Riley. They are the racers, fine specimens who compete daily in the Oudtshoorn derbies. When they retire, they often become breeders, living a John Holmes-style existence for sixty years or more.

And so there I was, a dedicated photojournalist, sitting atop the world’s largest bird waiting for the starting whistle to blow.

My steed fidgeted and shuffled her massive clawed feet to demonstrate her agitation and excitement. 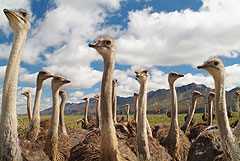 “Be careful not to upset her,” said the jockey to my left. “Those feet can do terrible things to a man’s genitalia.”

“What upsets them?” I asked.

Not for the first time did I wonder at the folly of this assignment.

I heard the crowd at the edge of the racetrack shouting encouragement, but I dared not to turn my head. Instead I remained focused on the lead ostrich and the little man riding upon its back. He had a large number “8” on his jersey. He was riding Red Rum, everybody’s favorite to win.

I squeezed tighter on the wings. I leaned forward so that my head was resting against my mount’s gangly neck and I whispered encouragement into her ear: “Go Orville go, run like the wind!”

That’s when I heard my wife calling enthusiastically from the sidelines. “Red Rum, Red Rum, Red Rum,” she shouted. I turned my head. That was a fatal mistake. The next thing I knew I was flat on the ground watching a multitude of featherless legs dashing towards the finish line.

Orville’s little head materialized at the periphery of my star-swimming vision. She looked at me with Goldie Horn eyes and then lunged at my throat. I watched helplessly as my Saint Christopher’s pendant vanished with an audible gulp.

“You won’t get that back in a hurry,” said Ben, the local racing-ostrich trainer. Ben picked me up and dusted me off sympathetically. “They love shiny objects,” he said. “To date, Orville here has gizzard full of coins, wedding rings, car keys and watches.” 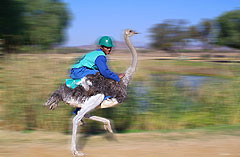 Riding an ostrich is not like riding a horse. For starters, horse jockeys have complete control over their steeds. This is not the case with an ostrich; an ostrich jockey has absolutely no control whatsoever. One must climb a little step ladder, straddle the creature’s back, hold on tightly to the base of the wings and then pray for salvation.

The gates are opened and out they bolt like ungainly greyhounds. It’s all over in a matter of seconds which as far as I was concerned was a very good thing indeed. Clinging on for dear life to a potentially homicidal giant chicken whilst it rushes at high velocity down a race track is terrifying. Surviving is enlivening. I felt like Ben Hur.

The South African ostrich racing scene was a spin off from the heady days of the great 1920s feather boom. It was a time when high-society ladies wore whopping bonnets festooned in feathers, the majority of which had been plucked from an ostrich’s Parson’s nose. Struggling farmers suddenly became rich. They rebuilt their houses as palaces and renamed themselves accordingly. They were no longer mere ostrich breeders; they were Feather Barons, South Africa’s elite.

Like posh people everywhere, they became decadent and opulent, and sat around in gardens drinking cocktails and getting bored. Racing aboard ostriches seemed the natural thing to do to pass the time.

The feather empires collapsed when the motorcar went into mass production. Big hats and fast-moving vehicles did not marry well. But the legacy of those giddy days lives on in the likes of Ben, a man who is not only an expert breeder of thoroughbred ostriches but also the region’s number-one jockey.

As far as Ben was concerned, racing ostriches was a perfectly normal occupation.

“There are many jockeys here,” he told me. “What about in England?”

He pondered this for a moment then said, “Never mind, you at least have the Queen.”

Later we dined on ostrich steaks and eggs, paying for the bill with the money my wife had won on Red Rum.

The following morning I returned to the ostrich stalls with a packet of peanuts. “Today, Orville,” I whispered, “you and I, we will take the world. Today we will win.” Of course we didn’t, but I certainly had fun competing in what I will always remember as the world’s wackiest race.